4When Brian Larsen was a kid, his family would pile into his grandparents’ motor home and tour dozens of Christmas light displays.

After seeing one remarkably decorated home at about age 10, Larsen asked his dad if they could set up a similar display at their Batavia home.

“When you get your own house, you can do whatever you want.” Larsen recalls his father replying. “So that’s what I did. Some guys collect Corvettes and Porsches and sports cars.

I do Christmas lights.”

Now 37, Larsen first set up a “static” light display at his Elburn home in 2006. Sure, there were plenty of lights, but they weren’t in sync with the holiday music. Then Larsen discovered how to program lights to flash and blink in time to music.

Add to that an estimated 1 million lights and you have this season’s display — dramatic and eye-catching enough to be a holiday destination.

It also has caught the eye of TV producers.

Brian and Angela Larsen and their three kids will be among eight families competing for a $50,000 prize at 8 p.m. Monday on “The Great Christmas Light Fight” on ABC 7. The object is to create the most spectacular outdoor display in three weeks. Michael Moloney and Sabrina Soto, hosts of “Extreme Makeover: Home Edition,” are judges. 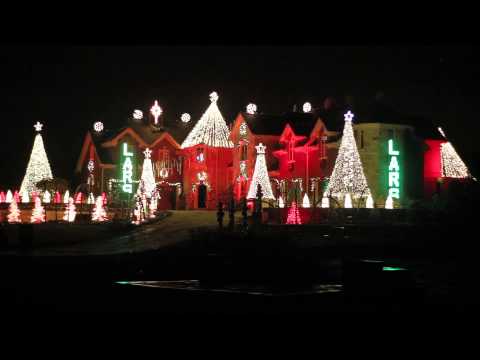 This year, the Larsens paved a parking lot next to their home at 42W891 Beith Road so visitors could watch the show without blocking traffic. The high point, Larsen said, was Christmas Eve, 2012, when an estimated 800 vehicles showed up.

Despite the massive numbers of lights, the display is anything but Clark Griswoldian — no inflatable Rudolphs or giant pipe-smoking Santas or mechanized reindeer. Instead, those million or more lights dance across arches in the lawn, climb the eaves and turrets of the house. Waves of colors cascade from triangular trees built out of tightly bundled lights. And the whole thing is synchronized to songs broadcast on a special radio frequency, 88.5 FM.

The display opened Thanksgiving night and runs through Jan. 2. Shows are from 5 p.m. to 10:30 p.m. Monday through Thursday and 5 p.m. through 12:30 a.m. Videos of many of his displays and other info is at larsenlightshow.com.

Lights and music are controlled by a computer network in Larsen’s home office. Programming a single song to the light display takes days.

It’s always a big production completing the display. In prior years, it has involved Larsen and a few friends working weekends beginning in August for the traditional Thanksgiving night unveiling.

But the reality TV show gave the competing families just 21 days to complete their displays. This made for long days, cold nights and stressful situations for the Larsens and helpers.

“The experience was neat. but it was really hard. I’m not going to lie,” Larsen said, noting that he and his seven co-decorators became “pretty grouchy” as they put in 12- to 14-hour days. “Let’s put it this way: It’s all a blur right now,” he said. “I’m trying to sit back and take it all in.”

The TV clock began ticking in mid-October. Camera crews were at the Larsen home for nine days during the three weeks of construction. Five to six time-lapse cameras were stationed outside the home to record progress. The crew also was required to strap on portable cameras and then mail the memory cards to producers.

Larsen owns a landscaping company, so he was able to devote more time to the display. Others, such as friend James Smith of Elburn, had to balance their regular jobs with helping on the project; they also had to put aside their social lives.

Smith used his connections as a fleet manager for a car dealership to line up bucket trucks and cranes to access the steeper portions of the roof and turrets.

“We were overwhelmed a little bit because we had so much to do,” Smith said. “Brian and I stayed up some nights ’til 2, 3 in the morning in the rain and cold just to get something done.”

But in retrospect, he adds, it wasn’t all misery, “Brian and I did have a tons of fun doing it. It’s pleasure spiked with pain.”

Angela Larsen says the annual project can be a strain — even before it was in the glare of the cameras,

“The biggest thing is this takes away from family time,: she said. “It’s hard, especially when the kids were little, really little.”

“They all fight over who’s going to turn it on every night,” Brian Larsen said.

Some families have a tradition after of stopping by their Thanksgiving dinners to see what the Larsens have cooked up.

One family has been making the drive from Rockford for four or five years.

Lorri Ligocki of Marengo made her sixth visit to the Larsen display earlier this week. Last year, while driving on Route 47, she saw a beacon of light on a hill and followed it to the Larsen home.

“It’s just so awesome,” Ligocki said from her car. “Last year, it was completely different, so this year is like seeing it for the first time again. The work and time and effort that went into it was amazing.”

That’s the payoff for Larsen.

“Just getting (people) into the holiday spirit, that’s why Brian does it,” Angela said. “Brian has known since he was little he wanted to do something like this. He loves Christmas. He really, honestly, truly loves Christmas. Knowing what it does for people … makes it all worth it.”

So, how much does it cost Brian Larsen to do this extravagant display of 1 million lights? He won’t say, but he did throw out this tidbit: He uses energy-efficient LEDs, so the total increase to his electric bill is only about $200 for the life of the display.

But it’s all worth it when the switch is flipped, says co-worker Smith, and it’s the visitors’ faces that light up.

Angela Larsen said she is excited, nervous and scared as the clock ticks toward Monday night’s TV show and contest.

The Larsens have not previewed the episode and don’t know the outcome. Brian says it’s an honor just to have been chosen and said some of his competitors’ displays from earlier years are “phenomenal.”

“I can’t imagine us winning,” he said.

“The good always outweighs the bad,” Angela said. “I’ve had people say ‘You can never stop doing this because it’s part of people’s traditions.’ That’s amazing to me. It’s heartwarming. (Brian) is very humble. He puts his all into it.”